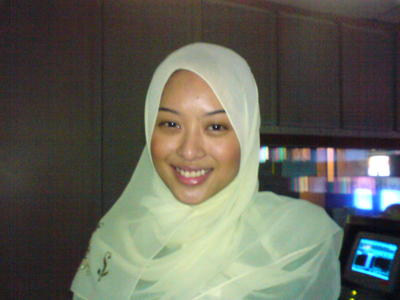 Yours truly in her once only tudung (head scarf) glory.

This is taken in the VTR room at Media Prima while filming Episode 12 of the Gua Centre.

Don’t worry, I haven’t converted to Islam just yet, but this was hilarious being covered up and pinned the traditional way as one would be in the conservative states of Malaysia. As I stepped out to greet my producer and co-stars, I couldn’t stop laughing and they barely recognized me. Everyone keeps telling me i look sweet in a tudung as for me, i look like one huge fat face.

I’ve been quite bored these days even though I have a million things to do.. been wrapping my head up with boys to be honest. But its better just to be friends with everyone. My girl Tej was telling me how I think i’m super tough – independant and kick-ass but really, I’m a sap and a needy one if that.

Jack. Canada will miss you. Your final words are a testament to the faith you have in Canada and her