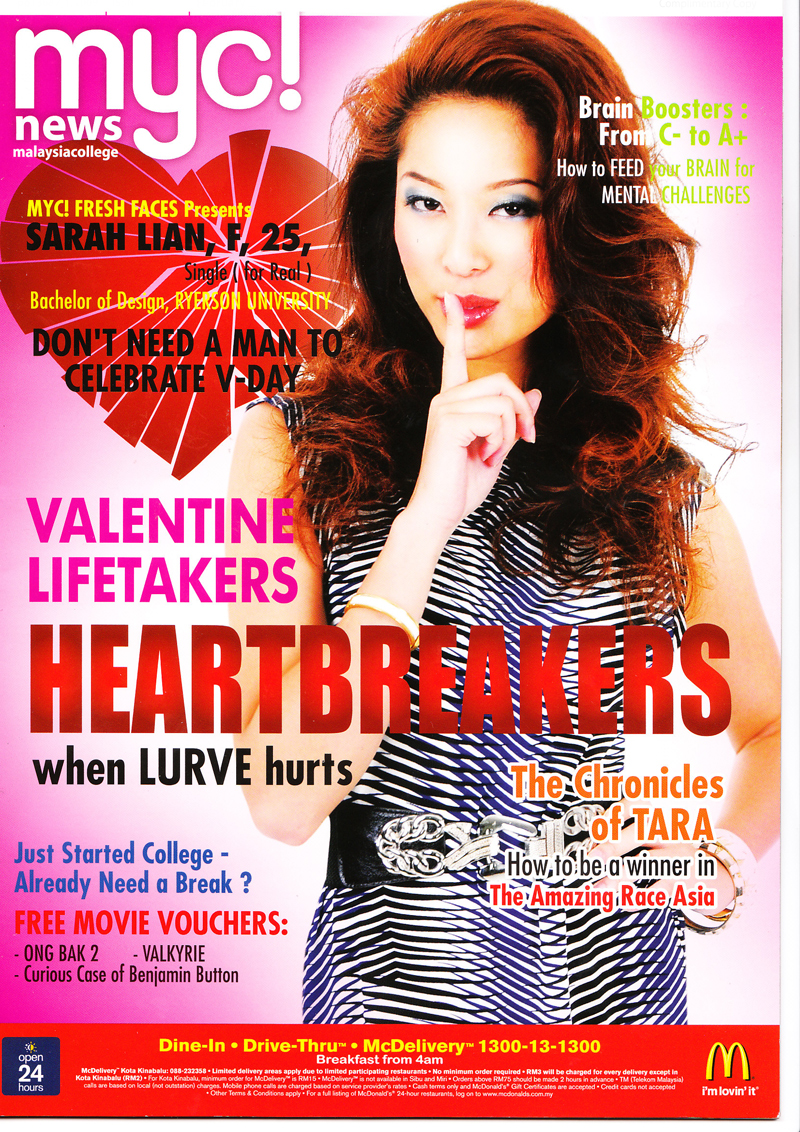 (MYC Feb 2009 Cover)
1. I get a hard on when I read design blog sites, esp product packaging.
2. I wanted to be a teacher when I was young but realized how shitty they got paid whenÂ Vancouver School Board Teachers UnionÂ were on strike in 1994 [and i was never taught how to swim…]
3. I take pride that I’m Malaysian and will say that before I say I’m Chinese.
4. Kate Moss is my favourite model despite her coke habit. She’s still rockin – tho I must admit the Asian Invasion has also included Mo Wandan and Du Juan on my list.
5. I always have visions of myself in my head having accidents and losing a leg or an arm, so I’m even more careful that things like that don’t happen.
6. I’m a super-photoshopper! I started at Adobe ver 4.0 > 4.5, 5, 5.5, 6, 7, 8,CS, CS1, CS2 and I still don’t know how to smooth the skin like the Mariah Carey posters. [but i know how to make my boobs bigger 😉 ]
7. I always meet my best friends within the first week of moving to a new city. MEL- Toronto, HAG/GUMP – KL.
8. I don’t have visions of my wedding when I daydream. I’m practical- like city hall practical.
9. I’m a sucker for Missoni and Diesel Ad Campaigns. It’s odd, but I have so many of their tearsheets in my Fashion file.
10. I hate doing my nails and toes, but its supposed to be important, so I have them done at a salon.
11. When I’m on dates, I hold out from kissing as long as I can cuz once that happens, it’s over.
12. I only hate 2 exes in my life. Thank God I live in a different country!
13. I’m a bit rough around the edges but with my boyfriend i’m the neediest, corniest person ever.
14. When I travel with my girlfriends, we shower together to save time.
15. I like my internet life better than I like my own life – for a while, lilmui had more glory than Sarah Lian.
16. Doing photoshoots in my own room with my own custom setting onÂ my camera is helluva lot better than some of the photographers I’ve worked with.
17. I will pull theÂ trigger onÂ the next magazine that asks me why I decided to move to Malaysia – I think people are tired of hearing about the same story.
18. I like sleeping naked.
19. I slept on the same bed with a girl for 8 months. Ask Jomomma.
20. Johnny Knoxville called me up to hang out when he was in Vancouver.
21. I’m preventing myself from dating this year because the kind of dating I did last year was unnecessary.
22. My favourite t-shirt is a Navy Blue NIKE Shirt that I found from that thrift store on Main (or Fraser) and Kingsway when I was in Grade 4. I still have it with me.
23. I hate stuffed animals. I don’t think they’re cute… and u doing a stupid voice with a stuffed animal isn’t that much cuter either.
24. I like Noam Chomsky’s critical view on politics and America.
25. I think Bush was as close to the anti-Christ as I know and think that Americans were even more stupid to vote him (or stupid to NOT vote) for the second time, which is why I think Americans are kind of stupid. I despise American heroic movies where some random dude saves the world after a lame speech about how “we can do it” and he’s American.
*Edited from my Facebook Version