I was invited on Astro Supersport’s Football Overload last Thursday to shoot an episode as a guest with Patricia K. They were featuring us in conjunction with hype for FHM’s 100 Most Wanted Women 2012. I had a total blast and it was my first interview back in Malaysia. Barely a week into the city and I’m already working!Â 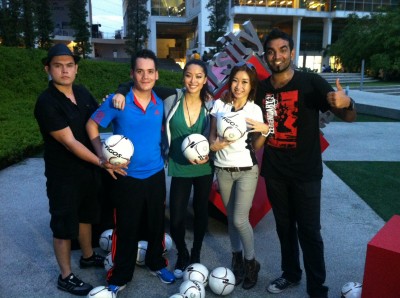 We shot a little Football Hunt game at Taylors University Lakeside Campus as a little segment for the show and as a side note, I’m seriously impressed by the magnitude of this place. With a beautiful lake nestled in campus life with residences and a mini-hotel to boot, man I would think that going to school here is a dream! (for KL-ites at least!) Anyway, I was paired up with host Adam C and we won the challenge by a mile! For a couple “foreigners”, I would say we really beat the odds!
Then I shot the rest of the show on Thursday with all the hosts plus a couple more. We played games and they put me on the hot seat where I revealed I’m in love with G-Dragon’s CRAYON track. The beat is so addictive! I also declared that I am a fan of the Tottenham Spurs! 🙂 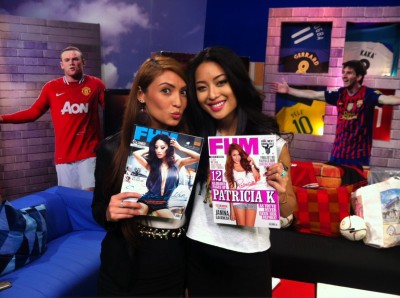 If you want an autographed copy of Patricia and my FHM covers, make sure you check out their Facebook page for more details – Football Overload.

I saw Patricia at the Hennessy Artistry Event last night and we had a good laugh about being on the show, not to mention bumping into Vince Chong too! I really like her segment asking for directions in Danish. See…..Malaysians are super nice people!!! Fun times!
Thanks again to the producers for the invitation to be a guest on the show, there were too many laughs on both shoots and those hosts are lucky to have so much fun each time. Hope you guys enjoyed this episode! 🙂
What was your favourite part?