During one of my quiet times this past summer, I decided to check out Toronto’s Public Library on Yonge/Bloor to find a good monologue piece. Since most of the workshops that I work on tend to be for my audition prep, I wanted to try something a little different. Inspired by a few pieces, I ended up with one called Night Luster by Laura Harrington.Â
Something about this introspective voice made me want to narrate more than perform. There are various interpretations of this monologue on Youtube but I thought I’d do something different. So I enlisted the help of my two visionary friends, Dennis Chan and Sai Sivanesan. Although they have never worked together before, both their contributions made this piece work so well. 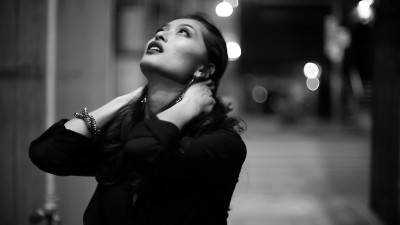 (Youtube Link)
Night Luster by Laura Harrington
I donâ€™t think people see me. I get this feeling sometimes like Iâ€™m invisible or something. I can be standing there in a room and Iâ€™m talking and everything, and itâ€™s like my words arenâ€™t getting anywhere and I look down at myself and sometimes my body isnâ€™t getting anywhere either. Itâ€™s like Iâ€™m standing behind a one-way mirror and I can see the guys and I can hear the guys, but they canâ€™t see me and they canâ€™t hear me. And I start to wonder if maybe Iâ€™m ugly or something, like maybe Iâ€™m some alien species from another planet and I donâ€™t speak the language and I look totally weird.
But I donâ€™t know this, you see, because on this other planet I had this really nice mother who told me I was beautiful and that I had a voice to die for because she loved me so much, not because it was true. And I arrive here on Earth and Iâ€™m so filled with her love and her belief in me and I sing like I have a voice to die for. And because Iâ€™m so convinced and so strange and so deluded, people pretend to listen to meâ€¦ because theyâ€™re being polite or something â€” or maybe theyâ€™re afraid of me. And at first I donâ€™t notice because I sing with my eyes closed.
But one day I open my eyes and find out Iâ€™m living in this world where nobody sees me and nobody hears me. Iâ€™m just lookingâ€™ for that one guy whoâ€™s gonna hear me, see meâ€¦ really take a chance. I mean, I hear them. Iâ€™m listening so hard I hear promises when somebodyâ€™s just sayinâ€™ hello. if anybody ever heard what Iâ€™ve got locked up inside meâ€¦ Iâ€™d be a star.
What do you think? (you can also thank the boys for the slo-mo ass shot, where I was outvoted 2-1 to keep it)
Thank you to Matt McAuley who squeezed time for me to play my “john”.
Thank you to Eliza Tam who is a fab makeup artist in the making!!