I never thought I would be writing another entry so soon and yet here we are! As I was exchanging greetings via FaceTime with different family members residing in Canada, my sister and I got into a conversation about the way we grew up. We talked about the pressures that her kids face and how Covid-19’s effects cancelling school has definitely affected their socialising. My sister and I started talking about how feelings were never factored into the equation when we grew up and it was hard to have conversations with our parents because well – immigrant life – we never wanted to add on more to their already overwhelmed plate.

My niece is a young teenager now and my sister is adamant about opening the lines of communication with her about self-worth, having crushes, talking to boys and what not. Societal pressures are at an all time high in that age especially since social media consumes people’s lives 24/7 and its all they know.

Today, I encountered a really unhelpful comment from a woman who was trying to give me advice to “protect” me from my fun loving bikini pictures (in the outdoors). So much of my conversation made me think about my nieces who will be navigating life and learning about who they are through the depiction of women in media or societal’s expectations of what it means to be a woman.

Sorry, it took me a while to get to this spot, but I really wanted to preface this story before jumping into the next part of this entry. So on my Instagram Stories, I wrote about how I get the occasional creepy perv messages from men. That sometimes they forget that I’m someone’s daughter and should check themselves.

I received a weird message shortly after.

You can see the exchange here: 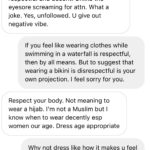 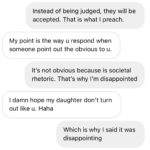 So I’ll be the first to admit that I actually bothered to continue the conversation because I was curious. I wasn’t angry and I was trying to understand a little more about what made her so adamant about measuring women’s worth by what they were. She highlighted a few things:

Dress appropriately – especially according to your age.

Last I checked, swimwear is for swimming and I was doing just that. I didn’t know that wearing bikinis had an age limit. If that were the case, please tell me what age is appropriate for swimwear. It’s not like i’m wearing bikinis and going to the mall.

Don’t dress in revealing clothing so men will degrade you.

“No one has shamed me for my body because I don’t give them a reason to”.

I think this is probably the most dangerous statement. While I’m not stupid and understand what she’s getting at, she’s also spewing a narrative that is very toxic. Harvey Weinstein’s lawyer said something similar “because I would never put myself in that position.” This is victim-blaming and its a narrative that has been used towards girls that go to clubs, or wear revealing clothing, as if they were the ones that were asking for it. Sure it’s a harmless comment here and there, but if we push the degree of the encounter to rape, its the same logic that these perpetrators use. No one asks to be raped, no one needs to be on the receiving end of lewd comments.

Many females dress in different types of clothing and still get subjected to abusive comments. No one asks for it and instead of telling women to cover up, tell men that it is unacceptable. I’ve definitely gotten fewer comments that warrant a name/shame situation but maybe because they know I’ll stand up for myself.

You should be unhappy because you’re unwed.

“I’m happily married with 3 kids, so I feel sorry for you.”

As I started to ask her questions about her statements, she decided to throw this one at me about how I’m not married and therefore unhappy.  I’ve been working out, eating well and keeping my mind sane through meditation. This was another micro-aggression that is no different than what society puts out there for women who have yet found someone to spend the rest of their life with. We all come to life in different areas and to shame them for not being in that stage or even bothering to choose marriage as their life path, is completely judgemental and toxic. So many women enter toxic relationships just so that they can marry and tie the knot to escape public scrutiny. Sometimes its not their time, yet and no one needs to judge them for it.

I’m a work in progress. Even though I still get angry at stuff,  I wasn’t angry at her, my DMs were blowing up with people who were really triggered by the conversation. I was merely disappointed that this was coming from a woman. Same kind of disappointment when someone from the entertainment industry tried to spread rumours about how I was sleeping my way  to achieve fame. It’s sad because they can’t look past your worth.

These kind of women are dangerous to our society. They find ways to tear others down and shame those who are trying to get out of their shell. I’ve been on a healing journey and its taken me a while to feel like myself again. I’m happy and I’m enjoying the great outdoors, chasing waterfalls et al. My last relationship exercised more constraints because my partner wasn’t comfortable with reading the comments men would leave me, not because I wasn’t confident enough to post pictures. So I respected how he felt and refrained from the unwarranted attention. Last month I reclaimed the idea of feeling “sexy” again because I was starting to love myself from the inside, regardless of what people would say about it. It was liberating and it was for me, sharing that on my social media was about sharing that journey of coming full circle, being in control of my own narrative.

This exchange has made me realise how judgemental we can be, while I started calling men on how to be more respectful of women, it’s actually keyboard warriors who hide behind the veil of social media. These women are also equally detrimental to the progress of women. They are the ones who keep other women back, with archaic views and misogynistic rhetoric. It was a conversation that needed to happen and a good learning moment for me to see how limiting other people’s view points can be. I know having that conversation wasn’t going to change how she felt about it, but it was to stand up against conversations that shame women who can’t stand up for themselves.

I hope one day she will consider what it means to raise a daughter in a society like this with equal opportunity and chance like any other son. I hope my nieces will never have to dim their light for boys who get provoked by their swimwear. I hope parents will have more conversations with their adolescent kids about deriving value from themselves than benchmarking it against others, or getting external validation from the opposite sex.

I’m really sad that these kind of thoughts define her and her 3 kids. WE have so much more to offer than being marry-able or to reduced to be so small so we don’t attract attention. Toxic femininity needs to end and these values need to decline. Let’s lift each other up and be beacons of light for each other.

Previous Be Unstoppable
Next Power of Choice

The Crutch of Self-Work