Am I a scaredy cat?

Context: It’s Day 4 since our general election and Malaysia’s hung parliament and coalitions are unable to make any decision about forming a government. They need 112 seats to form a simple majority and the coalitions have 81, 73, 30 seats. There needs to be some sort of middle ground and support for one Prime Minister to form a government and set the tone for next 5 years of Malaysia.

I’m not super political, but I do like knowing what happens in my country in regards to policy. I believe in democracy yet I’m not fanatical in the way that I need to beat down anyone that doesn’t share the same ideologies as me. I believe it’s important to exercise your vote and even if it’s not the outcome you want, being able to cast your vote is a way to uphold democracy.

“Sarah, are you scared?”

Actually, yes I am.

I’m a silent observer of American politics and I’d like to believe that Malaysia is not that bad when it comes to insurrection and violence. So why am I scared? Well, for every election that I’ve been in Malaysia, I’ll always get a call from my mom to stay safe and not go out during election night. She’s haunted by May 13, the memory is still there, her cousin was a taxi driver trying to get home and was slaughtered in Salak South for being Chinese. She tears up when she speaks about it and mutters under her breath saying, “It was unfair, he was just trying to come home from work.”

For those who were alive during that time, the pain is still very real. So there’s an underlying fear and trauma that comes out when they tell you to stay at home after you cast your vote. When she nags about how Malaysia is not safe, I’m dismissive and always shrug her off because I’m in my little KL city bubble. Everything about my lifestyle is created from a place of freedom and choice. My friends are a mix of ethnicities peppered with accents from the West or some sort of weird hybrid English that essentially proves we were not educated “locally”. We’ve moved forward that it seems like these haunting times are really of the past. The people in my bubble are not homogenous and there’s plenty of interracial marriage that exists to ever imagine that race and religion needs to be divisive. That’s what I thought…

Enter Undi18 and the opportunity for younger Malaysians to exercise their vote. A fantastic campaign to allow automatic registration for young voters 18 and above, to start having a say when it comes to voting for the people who run this country. I was not expecting a significant wave of voters to swing one particular way, but I was hoping that this new generation with access to internet and information, would be able to discern from the archaic rhetoric we always hear from simple-minded leaders.

However, I saw a screen shot of multiple TikToks of users showing their weapons hinting at May 13 in a menacing way to be threatening (you can google it, i’m not going to share it). I was reading a Twitter feed about parents saying that their kids were told by their teachers to vote PN to get rid of the Chinese and bring back Islam to Malaysia.What??? The reason to vote for this coalition is to WHAT??

Now, I’m scurrred. All the stuff my aunts and uncles talked about is starting to surface in my brain and it’s a small peephole of possibility that I could be in a place where people really have this subconscious hatred lurking. It also made me question my own bubble. How long have I been in my bubble for? Like holy shit, my Klang Valley bubble has kept me oh-so-safe but what the actual fuckery is this?

Why and how are these kids so deeply indoctrinated that they will brandish their weapons to incite fear? Who taught them this? How did it get this far?  Why did a highly conservative Islamic-based party win so many seats? News portals make fun of them for cancelling concerts. We read about their outlandish statements that make no sense. They’re always needing donations for seasonal floods and they’re perennially poor. But now, they are a point of contention? How? Did? This? Happen?

Since this election, it’s clear that the North East ain’t fuckable with anymore. Will the ideology of anti-Islam to be weaponised against the rest of Malaysians who don’t look or act Islamic? Does this mean that we -not only have to fight  corruption- but have to fight racial tension and racial divide as well? But wait, there’s more, how can they create an alliance with the racially harmonious Borneo Bloc, which is the antithesis of their brand ??????

The leaders that are meant to lead, stir their voting base and poison thoughts to to claim their power, negating the fact that the success of Malaysia is made through contributions from all types of Malaysians, not just one particular race…

This post-election unscripted drama is far more intense than anything I’ve ever watched. Like fuck. How many more days of reports do we have to read about people entering the Istana, exiting the Istana, meeting for coffee, meeting for lunch, exiting someone’s house, release of a video, release a statement, support for a statement, more videos, more tweets, more memes. 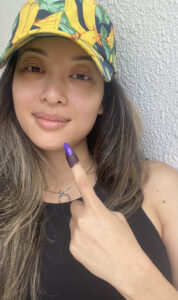 Regardless of the drama, what makes me most fearful, is that this outcome has put a lot of people off about voting.

Sigh. The outcome sucks because we’re in this political limbo, we’re praying that the YDPA can decide something that will be fair and just for the people. The silver lining is that through voting, we took out bad apples that did more harm than good. More voters means more voices, it gives us a clearer understanding of where people stand when it comes to this country. There is a resounding voice and it is heard, it may not be enough to be a tsunami but like healing, the best place to start is where the pain lies. I’m not trying to belittle people that voted differently, but instead try understand how we are fundamentally different? Is there common ground at all?

Fighting for change can’t happen overnight but the more we learn about our differences and similarities, the more we are able to find common ground. As frustrating as it is, we must continue to speak out against injustice and these friggin kids brandishing their weapons. We need to support young leaders that can connect better with this new audience and prove to the world that Malaysia can prosper.

I’m writing this because I am shook, religious extremism is scary. We see Iran and we think it won’t get to that place, but just recently friends from the LGBT community were persecuted on Halloween for dressing up in drag or “women’s clothing”. The need to police faith is so unfair, just like my mom’s cousin who was in the wrong place at the wrong time, he did nothing wrong, he was just Chinese.

There are dangers to this kind of thinking, it’s obvious that there’s generational trauma from all of this. There’s hurt, there’s frustration and then there’s the decision to leave because they don’t feel safe… and maybe that’s becoming more apparent to me right now. I feel like a scaredy cat and a mixed bag of emotions. I friggin love living in Malaysia and my life and my friends, but when it feels so lawless without any accountability, it’s like entering a toxic relationship with your ex claiming that it will get better and it doesn’t.

Am I the only one that feels like a scaredy cat?

Previous The Highest Form of Love